At the Teddy Bear Picnic!

- by Michael!
My wife is an amazing woman.
She’s beautiful, intelligent, funny, a natural blonde (she insisted I include this, FYI). She’s a devoted and talented artist, a gifted and passionate teacher, a caring and involved Christian.
Joanie is better read than I am, a better cook than I am, more of a “handy-man” than I am, and is definitely more capable of forming a lasting and caring relationship, evidenced most strongly by her commitment and devotion to Freddy. 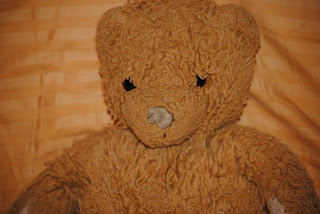 Please don’t misunderstand me – it’s not that Joanie still sleeps with Freddy in our bed. It is most definitely that I am permitted to sleep in their bed. And occasionally, I am allowed to keep some of the covers, although this is rare.
Shortly after we our wedding, Joanie and I were at my parents’ house and she asked where my old teddy-bear was. I wasn’t entirely sure, which upset her greatly, so I made every effort to find my neglected childhood companion, Robert.

Ever since, both bears have been a constant part of our lives, as Joanie has discovered that not only does Freddy not mind being cuddled simultaneously with Robert, but that she sleeps twice as well with two bears to snuggle. 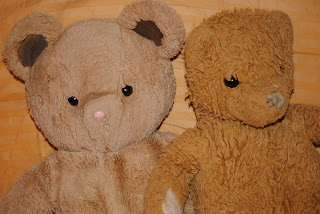 (Joanie just informed me that she cuddles with three bears, if you include me. Which she does, on occasion!)
Throw in the fact that, for some reason, one pillow per person is definitely not enough and there must be at least two blankets on the bed at all times, and evenings can become crowded.
Now, of the two of us, Joanie is undoubtedly the more mature. If you know me at all, you are aware that I am pretty much always within one movie, song, joke, or book reference of being silly. Seriousness is just not part of my nature, and assuming a serious demeanor is often difficult for me.
I more or less remain a constantly bubbling cauldron of quips and puns, most of which aren’t funny to anyone but me. However, the intent is clear enough, and most people who spend more than ten minutes around me are aware that I am often, for lack of a better word, silly.
Joanie, on the other hand, is much more reserved in her silliness. (Except for when she is around her sisters, which is another post, for another time.) The end result is that little things like her continuing love and need for her childhood teddy bear are even more adorable than they otherwise would be given her intelligence, maturity, and so on.
This need is now, to me, one of the most precious symbols of our marriage. I no longer really even think about the presence of teddy bears in our home, nor do I find it odd when Robert is deposited on my chest while I’m taking an afternoon nap with a whispered admonishment that he was lonely.
When Joanie and I spent last summer mostly apart from one another due to her contract in Tulsa, we traded teddy bears every time I came to visit. It’s just part of the fabric of our life together, a precious and important part, that I have come to value and cherish as much as her beauty, her intellect, her faith.
Just as another example of how Joanie’s silliness tends to be way more effective than mine, there was one time in particular when she really let her Inner Silly go.
I had returned from the laundry facility at our apartment in Waco with a load of freshly dry clothing and immediately turned around to get the second half of our newly laundered clothing. The clothes in question had been deposited on our bed for imminent folding in a grand heap. I returned with my burden and entered into an unlit room. Thinking Joanie had gone outside to check the mail, I went back to the front door and called for her – no response.
I turned back and looked around the apartment quizzically. (Given that this apartment was roughly the size of a decent-sized tennis shoe, this did not take long.)
“Joanie?” I asked the suddenly vacant-feeling apartment. “Are you in here?”
I walked back into the bedroom and turned on the light. This was apparently the cue for which she had been waiting, for lo! There amid the comfy, downy clothing, in a small hollow made by pushing towels up in a ring around the crater-like center, lay my wife, curled up into a ball.
Who proceeded to make a noise that I can best describe as the adorable baby of a snarl and a groan, two unattractive parents whose aural child was inexpressibly adorable. As she snarloaned, she slowly uncurled her torso from her knees and made feeble clawing and grasping motions with her hands.
Which were, of course, curled into talons.
Yes. My beloved, my bride, the light of my eyes and love of my heart, was imitating a baby velociraptor.
My laughter shook the building.
It was on our minds due to a recent viewing of Jurassic Park, greatly aided in its entertainment value by the inclusion of a RiffTrax featuring Mystery Science Theatre’s Michael Nelson and the one and only Weird Al Yankovic. (If you have never experienced one of these, go here and thank me later.)
So it’s not like baby velociraptor was just this thing Joanie had always wanted to become. (Or at least, not that she’s told me. I could be wrong, here.) But still – it was definitely one of our most wonderful moments ever.
And it was, of course, shared by Freddy, whose presence in the nest was ubiquitous.

Now, as you may know, my wife and I are apart for the summer - she's performing with Light Opera Oklahoma in Tulsa, and I'm manning the front back in Mobile. However, we are prepared. As much as Joanie loves having both, she was generous enough to leave Freddy with me and take only Robert with her! So we both have company. But not before one last adorable picture.

You aren't ready for this.

But here it is: 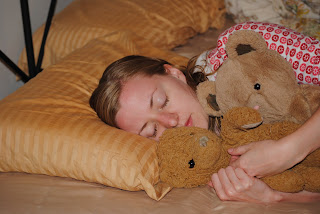 I miss you, Joanie!